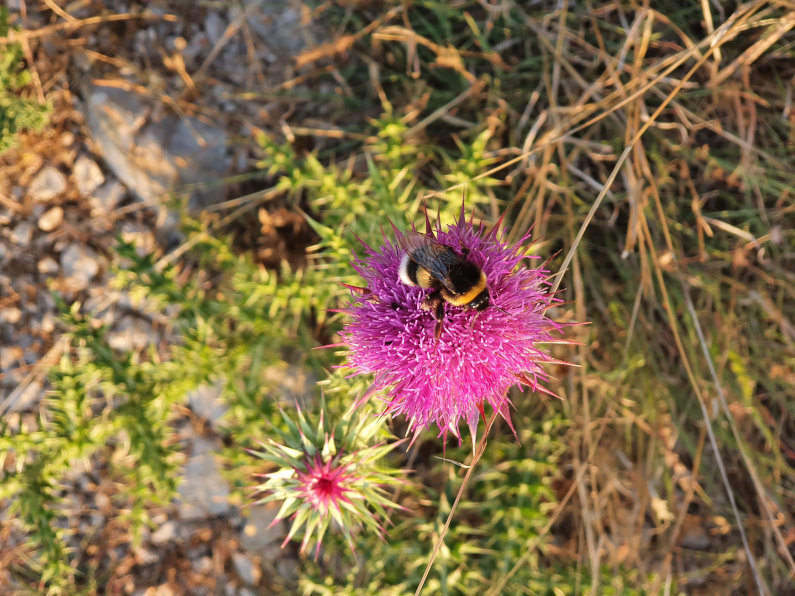 One of the most common pollinators you can see in Croatia is the buff-tailed bumblebee, Bombus terrestris. This species is exactly what most people imagine when they hear the word “bumblebee”: a roundish black body with two yellow stripes and a white one at the end.

Bombus terrestris is one of the most abundant and widespread bumblebees in Europe, with as many as nine subspecies recognized. You can see it almost anywhere where some flowers can be found, including cities and farmland, from early spring to early fall. Like other bees, the buff-tailed bumblebee feeds on pollen and nectar. It belongs to the so-called short-tongued bumblebees, which means that it collects nectar from relatively shallow flowers, with short corolla.

Bumblebees are social insects, living in organized colonies. Their colonies are annual, meaning that at the end of each vegetation season the workers, males, and old queen die. Only new queens will survive, hibernate over winter, and establish a new colony in early spring. Bombus terrestris queens build nests underground, often in abandoned burrows of small mammals. The nests can grow large and contain up to 400 workers.

Buff-tailed bumblebee is one of the rare bumblebee species with a Mediterranean-centered distribution. Bumblebees evolved in the Himalayas, and they are primarily adapted to cold and temperate climates. Due to these cold-loving traits, bumblebees are most diverse in the mountainous and northern regions. They are also the groups of bees that are especially vulnerable to climate change, as they have a relatively low tolerance to heat stress. However, this is not the case for buff-tailed bumblebee, which can live in a variety of habitats and climates, from northern Europe to the shores of the Mediterranean, and which tolerates hot and dry conditions very well. In the Mediterranean region, the buff-tailed bumblebee queens enter summer aestivation instead of winter hibernation. Colonies are established in the fall, and they are often active all winter.

Bombus terrestris is the most common managed bumblebee species. Bumblebees are commercially reared for crop pollination, especially to pollinate greenhouses tomatoes due to their ability for buzz pollination. The annual bumblebee trade is estimated at 2 million colonies (estimate from 2016., for the IPBES report on pollinators). The global trade and high ecological adaptability of this species have unfortunately caused the buff-tailed bumblebee to become an invasive species outside its native range, in South America and Japan.

Can you mistake this species for some other? Yes. White-tailed bumblebee, Bombus lucorum, is very similar, as well as the other species of this complex (B. magnum and B. cryptarum). The stripe pattern is identical to buff-tailed bumblebee, but the yellow stripes in B. lucorum are slightly lighter, lemon yellow while in B. terrestris they are darker, golden-yellow. Sometimes even experts find it difficult to distinguish these species. Also, at first glance, the garden bumblebee, Bombus hortorum, may seem similar, as it has a black body with yellow and white stripes. However, the clear distinction is that Bombus terrestris has only two yellow stripes, while the Bombus hortorum has three. Biologist and photographer Steven Falk prepared some excellent, publicly available resources for distinguishing common species of bumblebees, which can be very helpful.

According to the latest estimates for the European Red List of bees, Bombus terrestris is not an endangered species, although many other bumblebee species are (Nieto 2014).